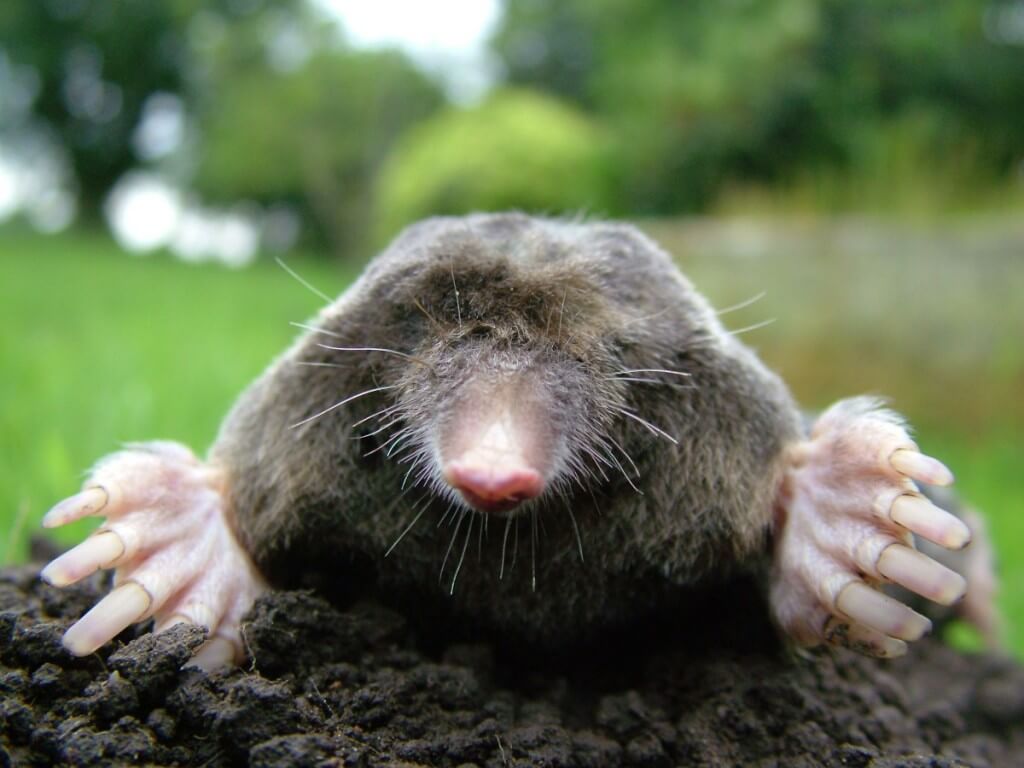 Moles have been found to tolerate higher levels of carbon dioxide than other mammals, because their blood cells have a special and unique haemoglobin protein. Moles are able to reuse the oxygen inhaled when above ground, and as a result, are able to survive in low-oxygen environments such as underground burrows.

A mole's diet primarily consists of earthworms and other small invertebrates found in the soil, and a variety of nuts. The mole runs are in reality 'worm traps', the mole sensing when a worm falls into the tunnel and quickly running along to kill and eat it. Because their saliva contains a toxin that can paralyze earthworms, moles are able to store their still-living prey for later consumption. They construct special underground "larders" for just this purpose; researchers have discovered such larders with over a thousand earthworms in them. Before eating earthworms, moles pull them between their squeezed paws to force the collected earth and dirt out of the worm's gut.

The star-nosed mole can detect, catch and eat food faster than the human eye can follow.

Moles are considered to be agricultural pests in some countries, while in others, such as Germany, they are a protected species, but may be killed if a permit is received. Problems cited as caused by moles include contamination of silage with soil particles, making it unpalatable to livestock, the covering of pasture with fresh soil reducing its size and yield, damage to agricultural machinery by the exposure of stones, damage to young plants through disturbance of the soil, weed invasion of pasture through exposure of freshly tilled soil, and damage to drainage systems and watercourses. Other species such as weasels and voles may use mole tunnels to gain access to enclosed areas or plant roots.

Moles burrow lawns, raising molehills, and killing the lawn, for which they are sometimes considered pests. They can undermine plant roots, indirectly causing damage or death. Moles do eat plant roots.

Moles are controlled with traps such as mole-catchers, smoke bombs, and poisons such as calcium carbide. Strychnine was also used for this purpose in the past. The most common method now is Phostoxin or Talunex tablets. They contain aluminium phosphide and are inserted in the mole tunnels, where they turn into phosphine gas (not be confused with phosgene gas). More recently, high-grade nitrogen gas has proven effective at killing moles, with the added advantage of having no polluting effect to the environment.

Other common defensive measures include cat litter and blood meal, to repel the mole, or flooding or smoking its burrow. Devices are also sold to trap the mole in its burrow, when one sees the "mole hill" moving and therefore knows where the animal is, and then stabbing it. Humane traps which capture the mole alive so it may be transported elsewhere are also options.

However, in many gardens, the damage caused by moles to lawns is mostly visual, and it is also possible to simply remove the earth of the molehills as they appear, leaving their permanent galleries for the moles to continue their existence underground. However, when the tunnels are near the surface, they collapse when the ground is soft after heavy rain and leave unsightly furrows in the lawn.