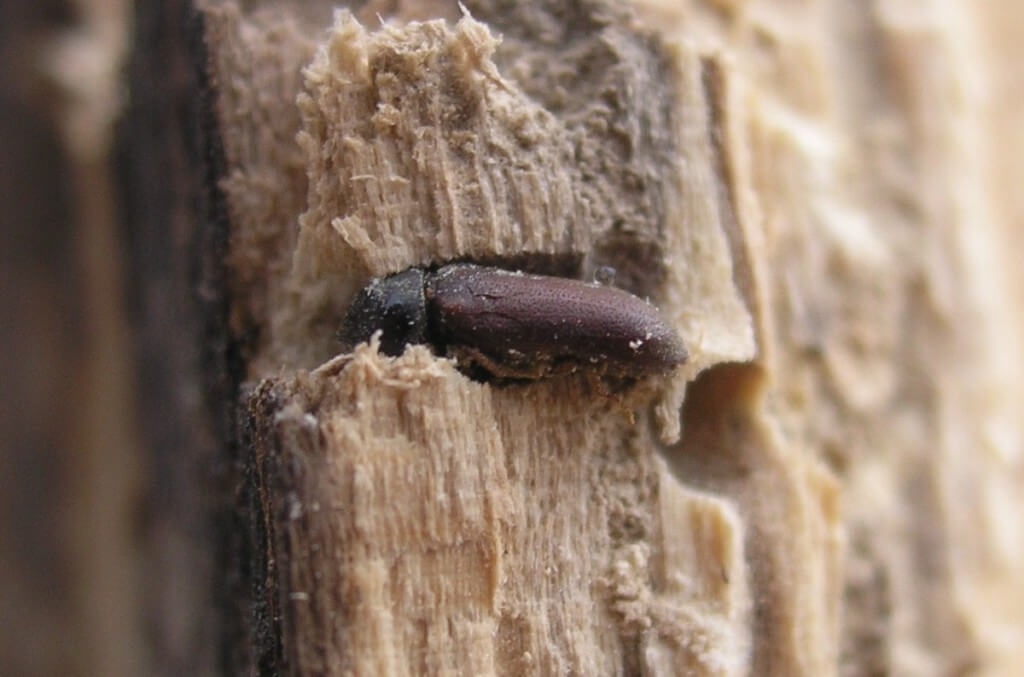 Woodworm is a generic description given to the infestation of a wooden item (normally part of a dwelling or the furniture in it) by the wood-eating larvae/grubs of one of many species of beetle.

Signs of woodworm usually consist of holes in the wooden item, with live infestations showing powder (faeces) around the holes. The size of the holes varies, but are typically 1mm to 1.5mm in diameter for the most common household species. Adult beetles which emerged from the wood may also be found in the summer months.

Typically the adult beetles lay eggs on, or just under the surface of, a wooden item. The resulting grubs then feed on the wooden item causing both structural and cosmetic damage, before pupating and hatching as beetles which then breed, lay eggs, and repeat the process causing further damage.

As the beetles evolved consuming dead wood in various forest habitats, most grubs, if not all, typically require that the wooden item contain a higher moisture content than is normally found in wooden items in a typical home.

A building with a woodworm problem in the structure or furniture probably/possibly also has a problem with excess damp. The issue could be lack of ventilation in a roof space, cellar or other enclosed space within an otherwise dry building.

Whilst damp is a leading factor resulting in woodworm some species of wood-boring insect, such as the Wood-boring Weevil, are only found in instances where fungal rot has already begun to occur.

Woodworm infestation is generally controlled with chemical insecticides. However, it is also advisable to investigate and solve possible damp issues, as dry wood is not usually affected, and wood that remains damp may be re-infected at a later date.

One other approach is heat treatment, which takes 24 hours (Thermo Lignum).

Additionally there are freezing treatments, which are quite effective, though taking 2–3 weeks, and which can cause a certain amount of damage. They are quite costly.

Low Oxygen is effective, but very time consuming, up to eight weeks, is often expensive.